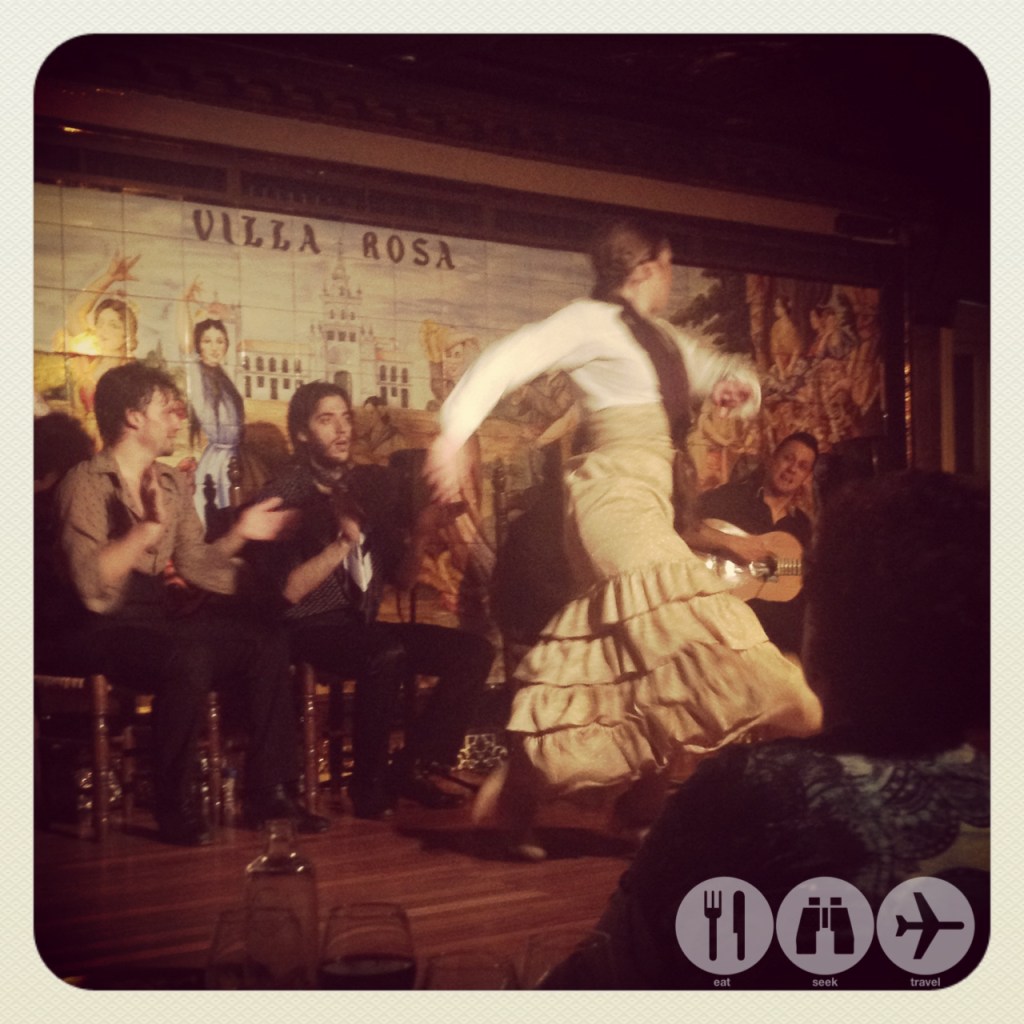 There are many places to see Flamenco Dancing in Spain, plenty of those are in Madrid, known as the capital of Flamenco. From back-alley local joints to exquisite dinner and show packages, you are sure to find an experience within your budget, and within your comfort zone as a tourist (how late at night you are willing to be on the metro in unknown areas). 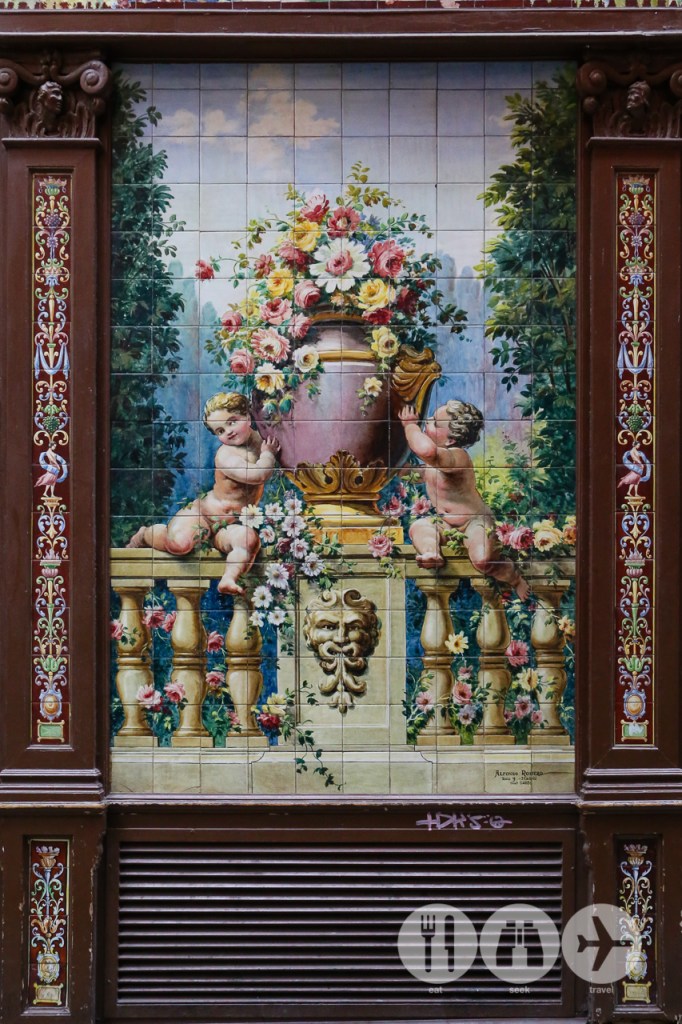 Artwork on the building’s exterior

After much deliberation, we chose Restaurante Tablao Villa Rosa. One reason for this is the history of the building. The site was in use in 1911 as a chocolate mill. Over the years it was taken over and transformed – the wooden counters and columns added, the beautiful painted tiles of Arabic and Andalusian style depicting flamenco dancing and bull-fighting. It has a rich history, evident in it’s walls, and has come a long way to being what it is today. Buildings just aren’t made like this anymore. We chose to have the simple “show with a drink” package, choosing to enjoy tapas at one of the many restaurants nearby before hand. The food looked amazing at Villa Rosa, but was slightly out of our price range, considering the show was the major draw for us. Having booked earlier in the day we scored a nice table only one table back from the front. Booking is available online, but if you go in during the afternoon, you can book in person, which we found far easier. From the moment it began I was captivated. First to grace the stage were two men– one with a guitar and one with his voice, both extremely talented. 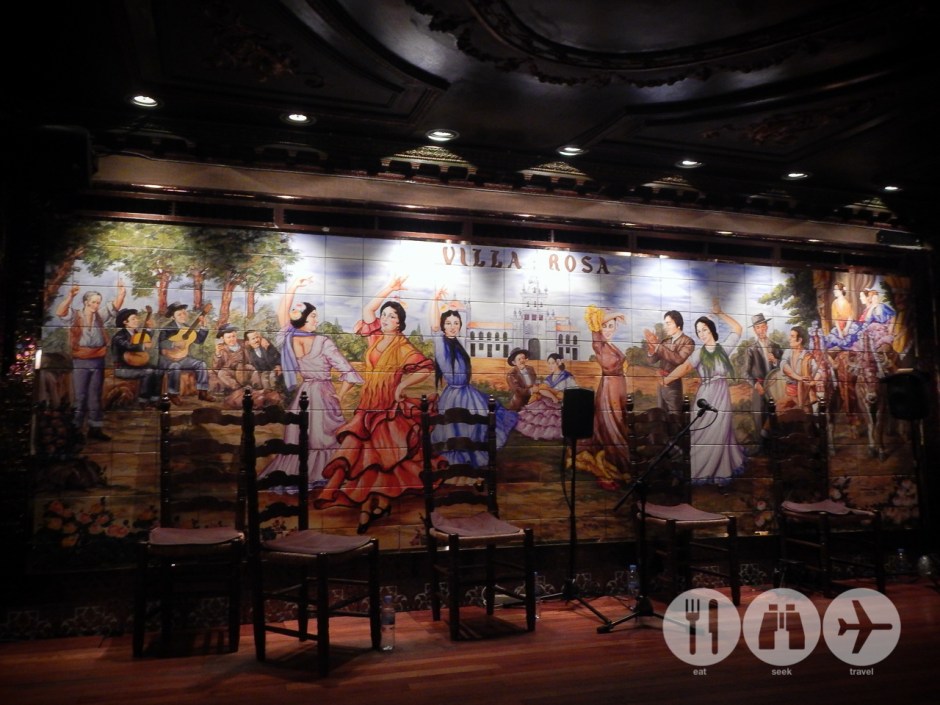 Once the show was in full swing I got the feeling that these artists–the musician, the singer and the three dancers– are a family, a team, a close knit circle of people who live for their passion of flamenco. It was like being invited to an exclusive club, watching something of pride and passion. I was honoured to be there and witness it.

There was also the feeling of improvisation. As if the dancers and musicians were working together and going with what moved them. Their eyes would follow each other, they would cheer each other on, as one dancer took the stage and pressed themselves to their limits the others would look on, you could see the hope in their eyes that the dancer, their friend, would achieve whatever it was they were trying to.

It was skilled, it was perfection, these people are trained professionals who excel in their field. Yet it was personal, it had heart, I was moved. 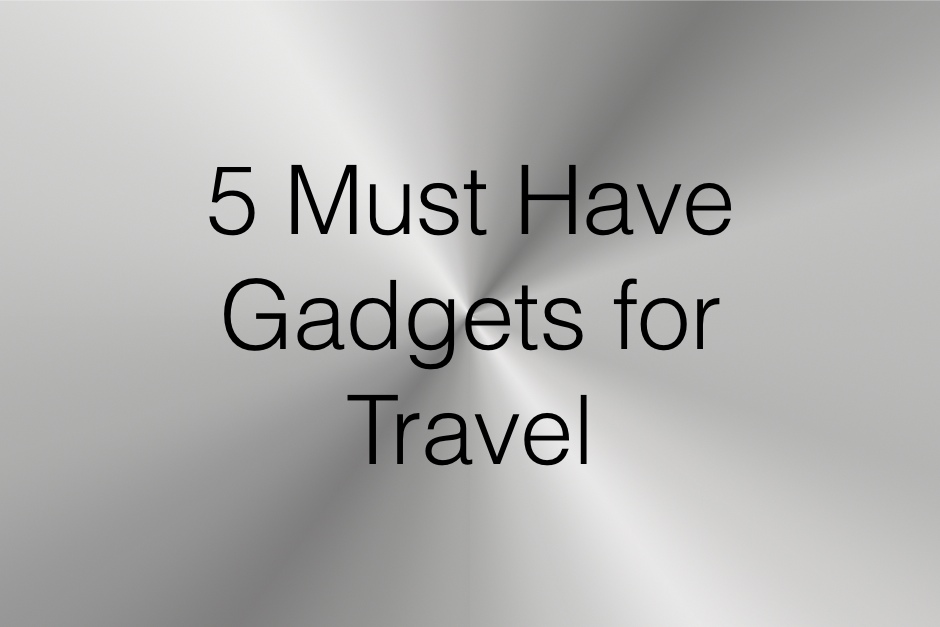 Whether it’s a short trip for a couple of days, or a long adventure coming up, here’s five gadgets we’ve found most useful in our travels around the world.

END_OF_DOCUMENT_TOKEN_TO_BE_REPLACED 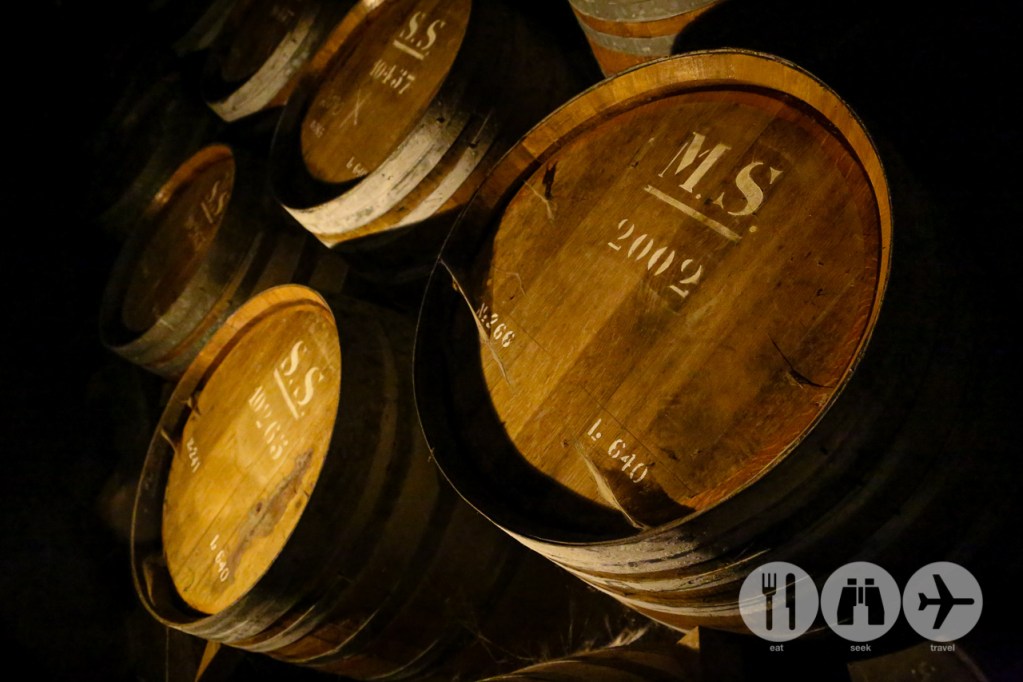 We recently had the pleasure of visiting “José Maria da Fonseca” winery while in Portugal. The winery is located in Setúbal, south of Lisbon, amongst picturesque mountains and coastline. Founded in 1834, José Maria da Fonseca is the oldest winery in Portugal to bottle its own wine. They are a 100% family owned winery run by both sixth and seventh generation family members. END_OF_DOCUMENT_TOKEN_TO_BE_REPLACED 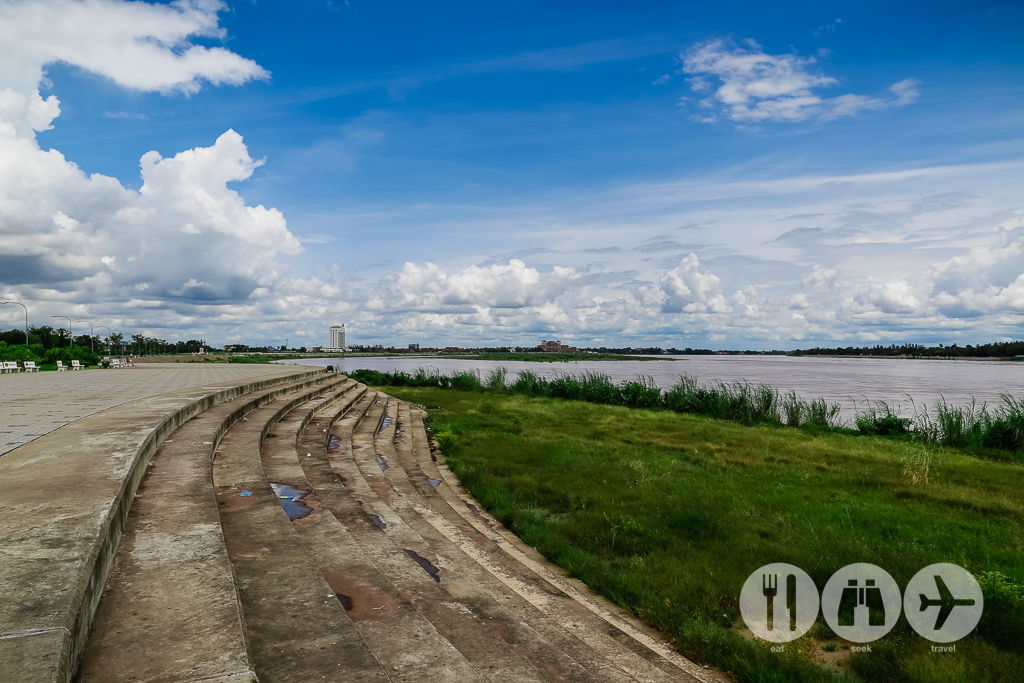 After twenty-seven days travelling from Cambodia through Vietnam, the prospect of spending two full days on a bus to get from Hanoi, Vietnam to Vientiane in Laos was too dire to contemplate. So, Justin, another couple we were travelling with, and I, decided to skip the bus and fly direct to Vientiane, situated on the Mekong River that borders with Thailand. END_OF_DOCUMENT_TOKEN_TO_BE_REPLACED

A big Happy New Year to all! We wish you the best for 2014 and may you make it ‘your year’ to shine and achieve.

We will be travelling for another 4 months before heading back home to Australia where we will travel for a further month before trying to get back to the real world a little.

I snapped this image last night just after the clock hit 12am and the new year rolled in. You see, in the UK fireworks are still legal for your everyday citizen to buy off the shelf (unlike Australia). As soon as the clock struck 12am, fireworks started popping up all over the place. There was no official fireworks display made by the town, but the locals really took it into their own hands. It was unlike any other fireworks display we’ve seen before.